The answer is a resounding yes!! 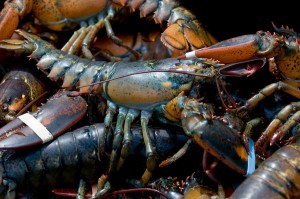 Fresh Maine Lobster are available year round in Rockland/Camden area.

Lobster is caught all year round off the coast of Maine and available at restaurants throughout Midcoast Maine and the Rockland/Camden area.   The number of restaurants that serve lobster will significantly differ between the warm summer months and the quieter time of year.  So if you cannot make it to Rockland’s Annual Lobster Festival or Lobsterpalooza Events in September – don’t panic as we have you covered!

After Memorial Day and increasing through the month of June, more and more restaurants will feature lobster dinners as standard fare on their menus.  You will see all sorts of creative lobster dishes including lobster ravioli, lobster Panini, lobster salad, lobster pies and a crowd favorite – lobster mac ‘n cheese.   Lobster rolls and steamed lobster dinners will appear on most lunch and dinner menus throughout the area.  Where you decide to eat it will depend on if you want it in the rough outside at a picnic table overlooking the water or in a fine dining establishment.  Ask your innkeeper and they will help to steer you to the best place to eat lobster in Maine, based on the atmosphere you are look for. 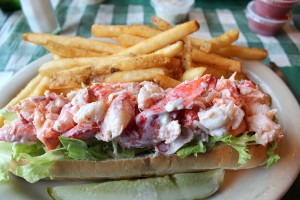 Lobster Rolls are available all year round with every restaurant serving them their own special way.

dramatically.  The months with the largest lobster catches tend to be August and September when a majority of the lobsters caught are also soft-shelled.  This is the time of year when lobster prices are at their lowest and lobster is the most plentiful.

Not only do less people fish for lobster in the cold winter months but with less supply and predominately most lobsters caught being hard-shelled, the cost of lobsters will be higher too. It is odd in the self-proclaimed Lobster Capital of the world that not every restaurant serves fresh lobster everyday year round but sadly it is true.  Most restaurants do not have their own lobster tanks in house which is necessary to increase the shelf life of a fresh lobster.  Because of this and the fact that locals do NOT eat lobster out in restaurants, most restaurants do not feature whole lobster dinners on their menus in the winter months.

If your are visiting our Rockland inn during the winter months, the Lobsterman’s Restaurant, Waterfront and Rockland Café are the three restaurants in Rockland or Camden are that consistently offer whole lobster dinners.  Young’s Lobster Pound in Belfast is the only local lobster pound to be open year round but in the winter months the lobster dinners are really to go as they do 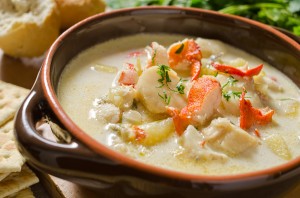 In the winter months try your fresh lobster as Lobster Stew or Lobster Chowder.

not have their picnic area available. Otherwise, you can still get lobster but it would be served as meat served with pasta or in lobster rolls, lobster wontons, lobster shots, lobster stew or a lobster dip to name a few.

When you are not in the mood to wrestle with the lobster to get at all of that delicious meat than you may want to consider ordering a “Lazy Lobster” or “Lazyman’s Lobster” as it is sometimes called.  Essentially this is the meat already picked out of the lobster and is served hot sautéed in butter.  It offers none of the work and all of the great taste!  Because the lobsters can be cooked ahead and the meat picked and stored, Lazy Lobster dishes are available year round in many restaurants.

Lobster not only tastes great but is good for you too!  According to the Maine Lobster Council, lobster is heart-healthy and is low in calories and fat and contains less cholesterol than lean beef, chicken breast or eggs.  Also it is high in amino acids, vitamins and minerals you need. Although dipping it in warm butter is out of this world delicious to keep with the healthier theme try eating it with just the juice of a fresh lemon or some Meyers Lemon Olive Oil from FIORE Artisan Olive Oils and Vinegars. Bon Appetit!