If you are coming to the Midcoast of Maine in the summer season you have to get out on the water. Rockland 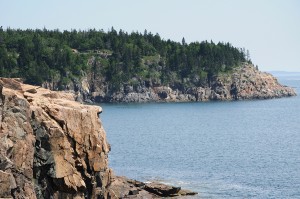 The rocky coast of Maine and its islands in Penobscot Bay.

is considered to be the gateway to Penobscot Bay which defines the towns of Midcoast Maine and is Maine’s largest bay. This large body of water is framed to the west by Rockland and runs north to Bucksport and east to the Blue Hill peninsula with Isle au Haut marking the eastern entrance to the bay. The outer southern edge is considered to be the very remote but inhabited MatinicusIsland.  PenobscotBay is roughly 30 miles wide (Rockland to Stonington or Isle au Haut) and about 40 miles long (MatinicusIsland to Bucksport).  It has over 1,000 islands ranging from granite ledges to Maine’s largest inhabited island of Vinalhaven (about 170 square miles).

Besides it prolific and fertile lobster grounds, PenobscotBay is considered to be some of the best sailing waters in the world. The scenery is breathtaking with the mountains, wildlife and lighthouses and with the abundance of islands there is always safe harbor nearby.  The islands offer a vision of yesterday with their busy fishing villages and historic downtowns and each island has its own unique flavor some are gritty some more quaint. The largest of PenobscotBay’s islands are Vinalhaven, North Haven, Islesboro and Matinicus.  Some of the other islands are privately owned with a single family compound, a lighthouse or a small village cluster while others are just inhabited by the wildlife – seals, puffins, wild goats and marine birds.

PenobscotBay and in particular Rockland and Camden harbors are home to the world’s largest fleet of historic windjammers.

The largest collection of historic windjammers in the US is in the Rockland/Camden area.

The boats typically schedule 3-7 night sails that offer unforgettable escapes that offer breathtaking views, gorgeous sunsets and warm breezes to help put the complexities and pressures of today’s world into perspective.  If “camping on the sea” is not your idea of fun then you can consider just a two or four hour sail.  The area has many daysailer boats that go out on sails 2 or 3 times a day depending on the time of year.  July and August are usually the fullest schedules and June and September when the morning and evening hours are cooler they may limit the excursions.  Many of the boats offer specialty cruises throughout the summer season like full moon sails, sunset sails, lighthouse sails with lobster bakes on a remote island.

The entire windjammer fleet is involved in some great special sailing events throughout the summer season that celebrates America’s sailing heritage.  These events can be truly enjoyed as passengers on an overnight sail or a day sail boat or as a pedestrian at the finish line.   These special events include the Great Schooner Race (7/5/14), the Maine Windjammer Parade of Sails (7/11/14) and Camden Windjammer Festival (8/29-31/14).

The 37th Annual Great Schooner Race which is scheduled for July 5th, 2014 is the largest gathering

of tall ships with more than 20 of these majestic vessels participating in the day long race from Islesboro to Rockland.  You can either hop on board one of the daysailer boats for the day or walk out to the end of the Rockland Breakwater lighthouse to see them come in to the finish. The coveted prize for the boats is year long bragging rights!  Many of the boats offer “open houses” after the event so that you can tour the vessels. 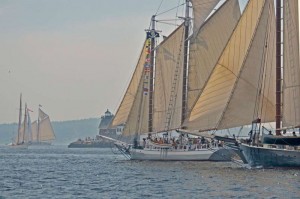 The Maine Windjammer Parade is scheduled for July 11th, 2014.  The entire fleet of overnight windjammers and the daysailer boats join in this fabulous parade of sails past the Rockland Breakwater and Lighthouse. There is an announcer that will introduce each boat to the crowds.  It provides a wonderful up close view of these great boats.  Many of the day boats offer specials where you can participate in the parade and view it from the water side of things. Following the parade, many of the boats will tie up at the docks and allow the public to tour them. And finally the Camden Windjammer Festival takes place on Labor Day weekend (August 29-31, 2014) and celebrates all things nautical and includes a parade of sail followed by all of the local fleets tied up in the harbor for open house tours, schooner crew talent shows, chowder cook off contest, rope tying lessons, lobster crate races, music and fireworks over the harbor.

Another exciting event that celebrates boating and boatbuilding is the Penobscot Bay Rendezvous.  There are daily races and challenges for powerboats, super yachts, daysailer boats for the first time racers to the seasoned professional.  The waters of Penobscot Bay are alive with activity with this four day event scheduled for August 14-17th, 2014.

There are other means of getting out on the waters of PenobscotBay to enjoy looking back at the craggy coastline against the mountains of CamdenHillsState Park. There are one hour harbor cruises that are offered from both Camden and Rockland harbors that will take you past area lighthouses where you can enjoy seeing seals and the seemingly endless parade of lobster buoys.  The Maine State Ferry terminal is located in Rockland walking distance from the downtown where you can take a day trip or just a boat ride to Vinalhaven the largest inhabited island in Penobscot Bay or North Haven.  If you want to explore the craggy cliffs and rolling hills of Monhegan Island that have been inspiring artists for 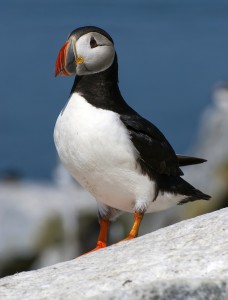 Take a Puffin/Nature cruise to learn about this wonderful birds.

centuries make reservations on the Monhegan Boat Line, the mail boat for the island (depart 10:30am return 4:30pm boat).  The Monhegan Boat line also offers daily nature and puffin cruises and lighthouse cruises throughout the summer season. Captain Jack Lobster Tours will give you the opportunity to learn up close and personal about the lobster industry.  The Captain is a real working lobsterman and his boat an authentic working lobster boat so it is the real deal.  You can sit back and watch or ask to take a hand in hauling or baiting a trap.

So whatever your pleasure – power or sail, working or cruising, with a destination in mind or going wherever the wind and currents take you there are a lot of different ways to get out and enjoy the beautiful waters of Penobscot Bay on your next visit to our Rockland bed and breakfast!