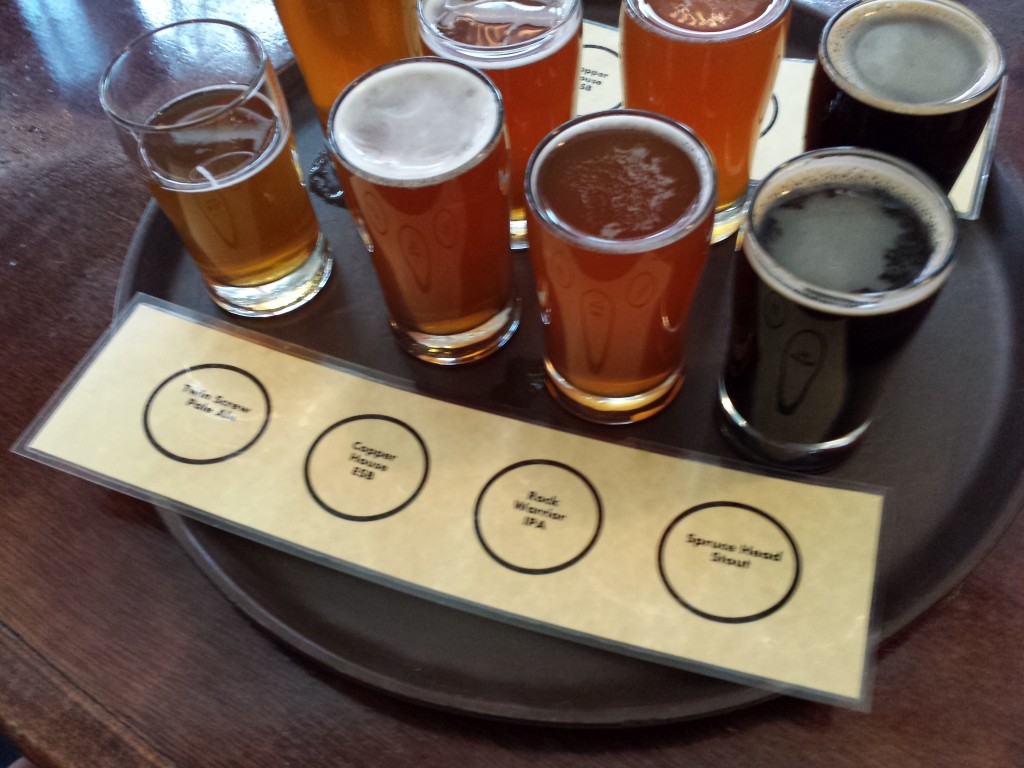 The Maine Beer Trail rewards visitors with gifts the more members you visit. Just print out the Beer Trail map and passport and as you visit one of the members you get a stamp. Visit 10 breweries and get a Beer Guild hat, 20 a t-shirt and all of them is the prize pack of all Maine Brew gear. Due to a recent ruling mid-February, Maine brew pubs and breweries will now be able to list a beer’s alcohol content on their signs and menus which until recently was illegal under a 1937 state law.

Maine’s micro and craft brewing started in 1986 and has been on the forefront for the craft beer movement in the country.  It is a growing industry and the members are now some of the best breweries in New England! Some breweries focus more traditional brews, while others use local Maine flavors like blueberries. At least eleven of the members of Maine’s craft breweries are located in Midcoast Maine area near our Rockland, Maine bed and breakfast.

Rock Harbor Brewery and Brew Pub, Rockland Maine
A fairly new member of the Maine Brewers Guild the Brew Pub opened in 2011 and features over 16 beers on tap daily and they started brewing their own in September 2013. They offer pub fare, trivia and karaoke and beer flights.  They are opening a tasting room summer of 2014.

Andrew’s Brewing Company, Lincolnville Maine
This brewery opened in 1992 with a father & son brew masters and was just the 5th craft brewery to open in Maine. They have primarily focused on four different beers – three ales and a porter with the Andrew’s Pale Ale being their flagship brew.  Although the beer was distributed at select locations in Midcoast Maine beginning in the summer of 2014, they will open a brew pub inside the Lobsterpound Restaurant in Lincolnville with the motto “Maine Brew with an Ocean View” which will combine the best of both world a great local craft beer and fresh Maine Lobster.

Monhegan Brewing Company, Monhegan Island Maine
Another new addition to Maine’s craft brewing scene, Monhegan Brewing Company is the first brewery and tasting room located on an island.  The brewery is family owned and operated and is open (call first) April through October with ferry service from Monhegan Island transport. Flagship brews are Lobster Cove American Pale Ale, Shipwreck IPA, Dead Man’s Cove Black IPA and Trap Stacker Special Ale.  If you don’t have the time to make the trip to the island most of the brews are sold locally at the Rockland Food Service.

Belfast Bay Brewing Company, Belfast Maine
Established in 1996, although they have created many others they have primarily focused on distributing nationally their two best beers – the Lobster Ale, a red ale and the international award winning McGovern’s Oatmeal Stout.  Tours of the brewery are by appointment only but product is readily available in the area.

Marshall Wharf Brewing Company, Belfast Maine
Located right on Belfast Harbor the brewery, tasting room and the adjacent Three Tides brew pub were established in 2007 and always have 17 draft lines dedicated to their over 30 beers on tap at Three Tides.  They are open year round.

Sheepscot Valley Brewing Company, Whitefield Maine
Small brewing company established in 1995 located in Whitefield (off of Rt. 17) about an hour west of Rockland. Need to call to check the hours for the brewery.  Specializing in unique beer styles including a full-bodied Scottish ale.

Penobscot Bay Brewery, Winterport Maine
A little out of the Midcoast area heading toward Bangor but still a reasonable drive from our Rockland inn is Winterport Maine home to Penobscot Bay Brewery established in 2009.  They are located in the same building as Winterport Winery so you can do tastings at both!!  They are known for small batches of brew in what they have tagged their “7 barrel system). If you decide to visit on a hot summer day they also have a Bay Brew ice cream which is ice cream featuring their brews – interesting. Generally open year round with varied hours by season and closed January and February.

Oxbow Brewing Company, Newcastle Maine
Another newcomer to the group the Oxbow Brewing Company is located in Newcastle, Maine on 18 acres and they brew their Belgian-style brews in a renovated barn. Their genre is know as saisons and they represent country ales that are brewed to quench your thirst and is a style that until recently was not common in the US.  They craft seasonal beers and their brewery’s slogan is “Loud Beers from a Quiet Place”.

Boothbay Craft Brewery and Watershed Tavern, Boothbay Maine
Established in 2011 on the grounds of the Boothbay Resort Cabins, the microbrewery and brew pub is built to be an old American tavern.  The call their variety of brews “Imperial Attitude Ales” as they are not only handcrafted in small batches with the finest ingredients but they add character, passion, community, friendships to name just a few of the positive attitudes added to each brew.  Open Year round and offering tours and great food in the tavern.

Maine Beer Company, Freeport Maine
This micro-brewery was established in 2009 by two brothers.  Maine Beer Company is an environmentally sensitive and social conscious brewery and offers guests a tasting room with over 8 of their beers on tap and although they do not offer brewery tour the tasting room has great views of the brewing operation.