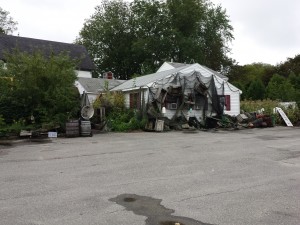 In today’s world it says a lot about a restaurant if it can stay in business for over twenty years with the same owner.  It says even more about that restaurant if in all of that time it has NEVER advertised, is CASH ONLY (no credit cards), has NO PHONE and has NO SIGN to indicate what the building is and give any indication if they are open or not. Despite being featured in DownEast Magazine (8/13), named one of the top 10 best seafood dives in the US by Coastal Living (7/13), appearing on Anthony Bourdain’s No Reservations April 2010, and having numerous articles written on him through the years in the NY Times, Conte’s 1894 Restaurant or Conte’s as the locals call it, remains one of Rockland’s best kept secrets.

The best way to describe Conte’s is adventure dining.  Think of a Seinfeld episode waiting to happen like the Soup Nazi.  If you are a person with a sense of adventure; can be flexible to accept a somewhat unconventional atmosphere and are laid back enough to just go with the flow when it comes to dinner service than you are the right fit for a Conte’s adventure. Conte’s is not for all people and that is okay. You really have to appreciate the John Conte’s focused passion for serving seafood as fresh as possible and cooked how he thinks will optimize the flavor.  Personally, I give the man a lot of credit for continuing to do what he loves, the way he loves to do it regardless of what mainstream public opinion may be.  His restaurant – his rules, so really if you do not like it you do not have to come nor come back.

Okay so this is the drill.  Generally Conte’s is open everyday for dinner service from 5-8pm including legal holidays. Unless John does not feel well and he decides not to open or he gets tired and decides to close early or someone insults him by trying to tell him how to properly cook fish and he closes.  Get it – he has flexibility in his hours but you do not necessarily know it and because he does not have a phone you cannot exactly call to see how late he is serving.    During the busier summer and fall seasons he will more than likely go until 8pm (his time) most nights but you want to plan on getting their no later than 6:15 or 6:30pm, on Saturdays in August probably earlier or you may not get in. During the quieter winter months, it is not uncommon for him to close things down by 6:30 or 7pm if it has been a particularly slow night.

You walk into the restaurant and you will see a sign on the door that lists the general list of fresh seafood he has and some options for sauces.  For the last few years, he has added this feature of creating your own entrée – pick the seafood, pick the sauce.  Otherwise closer to the entrance to the dining area there will be a chalk board with 10 or so entrees scrawled ½ English/ ½ Italian and perhaps a few pages of butcher paper with some more choices.  The wait staff is great and they will help you decipher.  You place your order and then will get pointed to your table. All of the tables are dressed in sheets of our local newspapers so you can read what happened in Rockland from a few weeks ago and the tables are lit with candles stuck in wine bottles.  John does not like to waste money on electricity so most of the lights are kept off.

The wait staff will bring you the day’s version of fresh salad that sometimes is a bowl of tomatoes with dressing, sometimes 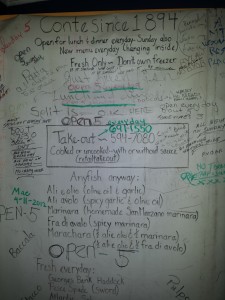 Sign in door of Conte’s Restaurant. Says open for lunch but they are not. Lists a phone number but not sure whose it is. People add there own notes if they came and John was closed.

is a boiled dinner like grouping, sometimes is just lettuce and cheese, sometimes there is cold pasta on the bottom – you get the picture.  After the salad comes the homemade bread and drinks.  Wine is usually white or red and the glasses tend to be small brandy snifters so equal a generous 1/3 to ½ of a bottle.  Soda and water is served in mason jars so watch the lip or you will find yourself dribbling into your meal!  Then the entrée comes – dishes won’t necessarily match and perhaps it actually is served in a pie pan but it will be a very, generous serving.  Don’t be surprised if you order scallops with olive oil and garlic that you see a piece of salmon or shrimp on your plate or if you order lobster that you actually get 3 1/2s or 5 claws.  John is very generous and sometimes just throws extra on because he can.

If you do not like “rare” seafood than do not order a swordfish steak or halibut as John believes that rare is the proper level of cooking for most seafood.  It really does not work well to try to order it “well” or to send anything back for that matter so stick with something else. This is where the eccentric or non-conventional side of John comes out.  When you are nearing the end of how much more you can eat, the wait staff will come over with zip lock bags for you to take your leftovers home with and bring you a hand written check on a piece of paper.  This restaurant is CASH ONLY so make sure you are prepared or your dining partner will be having another glass of wine while you run to the closest ATM.

If you enjoyed the freshness and flavors of the fresh seafood that John prepared and want to thank him you can ask the wait staff if it would be okay to poke your head into the kitchen and tell him or not. They are the best judge of the mood for the night.   John is probably fairly shy and really prefers talking to his fish or his animals than to people so he is not trying to be rude.  If he is not in the mood to talk he will just keep on working but generally he sincerely appreciates hearing that people of enjoyed his labors and his passion of preparing freshly caught seafood for people and you might just catch a little smile.

If this type of dining does not sound like something you would enjoy while visiting Rockland that is okay, save it for those of us that enjoy eating on the wild side every now and again.