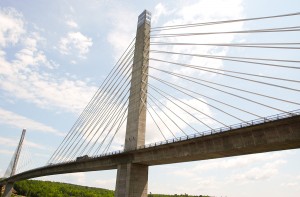 The Penobscot Narrows Bridge and Observatory is a great stop on your way to the Rockland/Camden area from Bar Harbor and Acadia National Park or visa versa.  On a clear beautiful summer’s day from the Observatory you will be able to see for miles and take in such sites as the mighty Penobscot River, Penobscot Bay and its islands, and Verona Island, Bucksport, historic Fort Knox and the mountains of Maine.  Late in the fall season when the leaves are changing colors and the blueberry fields have turned vivid red the view from the tower is absolutely breathtaking against the backdrop of a bright blue fall sky. It is estimated on a clear day that one can see about 40 miles which essentially is the distance from the bridge to Rockland.  In February, 2014, the Penobscot Narrows Bridge Observatory made Buzz Feed’s “Top 12 Most Breathtaking Views from the World’s Coolest Towers”.

The Penobscot Narrows Bridge Observatory Tower opened to the public in May 2007.  At 420 feet above the Penobscot River or the equivalent of about 43 stories high, the Observatory is the tallest occupied building in the entire state of Maine and the tallest ObservatoryTower of the four that exist in the world.  Visitors enjoy 360 degree views from the three decks. You take an elevator, supposedly the fastest elevator in Maine which makes the 43 stories in a minute’s ride, to the first of the 3 decks.  You will then take stairs to the other two decks.  For handicapped accessible guests there is a lift from the main elevator to and the Observatory is fully enclosed with safety glass.  The Observatory Tower has a capacity of only 49 people at a time.  When you purchase your tickets with the attendant, they will tell you the next available time and your ticket will be time stamped also. This system allows all visitors the time necessary to enjoy the breathtaking views.

The Penobscot Narrows Bridge itself is special in its own rights also.  It is one of only three bridges in the US that is built with what they call a cable-stay system where epoxy-coated steel strands are placed within 1” steel tubs to support the bridge. Each strand is independent so it can be replaced or removed as needed to ensure the integrity of the bridge system. The bridge spans 2, 120 feet and connects VeronaIsland and Prospect Maine. The roadway is about 135 feet above the waters of the Penobscot River. The bridge was planned, funded and completed in about 3.5 years as an emergency replacement for the old Waldo-Hancock Bridge built in 1931 which was Maine’s first long-span suspension bridge. 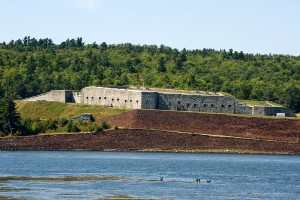 Fort Knox sits near the mouth of the Penobscot River near Bucksport Maine.

Fort Knox sits on about 124 acres and is considered to be one of the best preserved military forts in New England.  It was named for America’s first Secretary of War, Major General Henry Knox. A replica of his homestead and personal artifacts are on display at the General Knox Museum in Thomaston Maine located just a few miles south of Rockland. After many naval defeats and scrimmages in the area, the fort was established in 1844 at the mouth of the Penobscot River to protect the Penobscot River Valley and its  rich lumber lands desired for ship building.  Although nearly one million dollars was spent on the fort it was never fully completed per the original plans, the fort reached its final state of completion in 1869 and became the first fort in Maine to be built of granite instead of wood.  Visitors can enjoy the grounds and the catacomb of tunnels that run under the ground and look for ghostly creatures such as Civil War Sgt. Leopold Hegvi who supposedly roams the fort.  In 2013, Urban Ghosts Media Company has named Fort Knox as one of the top ten haunted military forts in the US even though it never saw any actual military action.  Every year for two weekends near Halloween,  the fort is transformed to “Fright at the Fort” which is considered to be Maine’s best Halloween experience in the state.  Small groups of visitors are led through the tunnels in the dark by lantern light and meet all types of creatures of the night – some from this world and some perhaps not!!  For 2014, the dates will be October 17, 18, 24, 25 and 31st from 5:30-9pm with the last tour at 8:30pm.  Tickets are $10 per adult and $12 with an express ticket. Check out their website for more information.

The Observatory is open daily from May 1st through October 31st.  Normal operating hours are 9-5pm with extended hours until 6pm for July and August. The Observatory is open at nighttime for specific full moon periods in the summer.  You can check out the dates on their FaceBook page.  Fort Knox is also open May 1st through October 31st with hours from 9am to sunset.  The grounds themselves are open year round.  The physical address is 711 Fort Knox Road, Prospect, Maine 04981.